Sources of Inspiration: Secret of Kells

Today I'm going to talk about one of the sources of inspiration for my novella series: The Secret of Kells.

TSoK is an Irish animated movie about a monastery that's facing a siege from Viking raiders. That's actually a gross mischaracterization. It's more about paranoia, self-actualization, and reconciliation.

The main character, a boy named Brendan is being raised by his uncle who is the head monk of a monastery. Brendan is getting older and wants to explore the world for himself. This motivation is at odds with his uncle who wants to wall the world out (literally).

An artisan monk shows up with an illuminated manuscript which sends Brendan into the forest to search for ingredients to make more ink for the book. I won't spoil more than that here, but if you get a chance to watch The Secret of Kells, you should.

The themes of resistance to change, the inevitability of change, the dangers of pride, the beauty of nature, and the power of friendship really resonated with me. Several motifs from the film made it into my book, and I'll maybe talk about those more in the future. 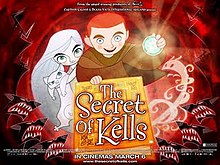