I'm starting to brainstorm ideas for the second book in my Hunter's Rose series. I think I already have quite a bit of material to work with, and I'm really excited about that.

First, I love the cover of the debut novella. The artist did such a great job with the initial concept. From there, it was just a matter of refining it until we were both happy with the product. In the end, it turned out great, and I've gotten a ton compliments on it.

Second, since these books are a series, I feel it's important to keep a lot of elements the same. The covers can't look too much alike, so that's going to mean a change in the color scheme at the very least. Some of the other elements will have to be different as well. For instance, the ruins in the upper left are going to have to go. The wolf, as much as I love it, will be replaced as well.

Finally, I'm going to keep some things the same. the circle with the title, that will stay. Most of the lettering will stay the same. The text deliminater at the bottom of the cover will remain. Maybe some other things as well.

All in all, the second book will keep just a small part of what the first one offered, but the remaining elements will easily signal to the reader that A) this is a series and B) you're going to really enjoy it! 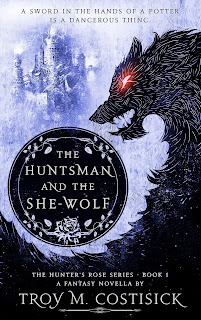