I'm Having a Launch Party!

To kick off the release of my second novella, we're going to have a party! Bellow is the official press release:


FOR IMMEDIATE RELEASE
Marion County High School Library of Lebanon, Kentucky has invited Troy M. Costisick to celebrate the launch of his second fantasy novella, The Huntsman and the Vampire on February 12, 2020. A student session will be held in the library from 2:30pm until 3:30pm. A second party for the public will follow from 3:30pm until 5:30pm.

Costisick is a teacher at MCHS as a member of the English department. He has worked in the field of teaching since 2002 and has served at MCHS for the last 15 years both as an English teacher and an ECE collaborator.

His first novella, The Huntsmen and the She-Wolf, was launched just last year to resounding success on March 26th. The launch of his follow-up work extends the story of Tristan DeSavoie as he endeavors to reclaim his family home from the mysterious powers that forced his father to sell it.

The Huntsman and the Vampire officially launches on February 12th, 2020 and is available with numerous online retailers including Amazon.com, Barnes and Noble, Books-a-Million, www.troycostisick.com, and more.

If you're able to make it, I'd love to see you there! Don't forget, if you can't make it to the party, you can currently pre-order my books in eBook, paperback, and hardback from Amazon HERE. 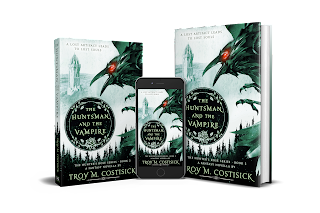