Hard to believe it's been ten weeks since we started this. We're getting down to the last of the interior images that I have for Book 2. So what does that mean? Haha! That means the cover is next!

So, be looking for reveals concerning that in the very near future. Anyway, let's move of to what we're revealing for this week.

One of the things I had to accomplish in The Huntsman and the She-Wolf was a brief tour of the setting. Everyone starting a book series wants to get a general idea of what the places are like and what the history says about the people.

While the main characters are on their way to investigate the coal stoppage in the mines, Phen and Mersha basically describe all the significant locations in Celandine Valley to Tristan. He, of course, was kept from the village school most of his life. His father provided all his education, and while it was full of reading, writing, bookkeeping, and pottery, it was very light on history and geography. Thus, his troupemates had to fill him in.

One of the locations they described appears in Book 2. Its location is far in the north nestled against the mountains. Anyone coming to Celandine Valley must pass by it in order to enter.

Last chance to avoid any spoilers!

I give you Everpass Hold: 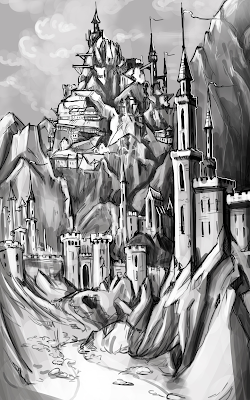 It's an impressive fortress, isn't it? Sadly, it's almost all empty. The numbers of valley-dwellers willing to serve as huntsmen has steadily dwindled over the years.

As a result, only about a dozen or so work in the keep anymore. Most of them are young and barely trained for combat.

Instead, Everpass Hold has become a place of refuge and care. Many wanderers from the outside world first visit this place as they look for a new life inside the valley. The hunters here feed them and minister to them until they are strong enough to make the journey to Vitalba village on their own.

As you can see, there are towers and lookouts all up and down the mountainside. They've been sealed off, for the most part, in a bygone age. None of the workers living there now have any idea what's inside them.

Despite all this, the keep is still warm, well-maintained, and welcoming. The front gate is barred open and guests are never turned away.

Everpass is one of my favorite locations. The lost grandeur, the joyful mood, the brilliant white towers, and the air of mystery surrounding it constantly pique my imagination. I can't wait to share it with you in Book 2.

Until next week, take care of each other.