Today I'm going to share a tool I've used over and over as I've been writing the books in my Hunter's Rose series. It's probably the last thing you'd associate with a creative writing endeavor: a spreadsheet!

If you're like me, your associations with spreadsheets probably are along the lines of that thing your dad used to do to balance his bank accounts or the feeble attempts of middle school math teachers to teach you basic coding skills in Excell cells.

However, spreadsheets are really wonderful organizing tools. It's amazing how much having columns and rows will help you keep very complicated information straight in your mind. Let me show you what one of my spreadsheets looks like: 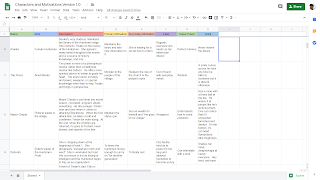 This is my "Character Bible" as some authors call it. In the first column I list my characters, then in the next is their role in my story. Very often that's some kind of archetype.

The biggest block is the description. Here, I type in a brief portrait of what the character is like and what he or she might do. It's sorta like describing a person to a friend that doesn't know him/her. Some entries are really big, others are kinda short. I just typed in whatever I felt was appropriate.

The next two columns are primary motivation and secondary motivation. Characters will seem more real if they actually want something, and EVEN MORE real if they want more than one thing. Listing their motivations here on this spreadsheet helps me keep their personalities consistent when I'm writing.

After that, is the Flaw. All characters need a flaw. They can't be perfect people. No one wants to read about that. Even the sappy, shallow, but still very somehow entertaining Hallmark romance movies have characters with flaws. So I made sure my characters had them too by including this column. Now, a flaw doesn't have to be major. It just has to be important to that character, AND it must come up in the story. That's key. I repeat: it must come up in the story.

After the Flaw, I have the Superpower. Now, these aren't really superpowers. I just used that term as shorthand. Really, it's what makes that character special. I asked myself, "What can this character do better than anyone else in the setting?" That became their superpower.

Finally, I list the quirk. All of us do something weird. Some people chew their nails, some wear red socks, some squint really hard whenever they blink. All kinds of weird stuff. Your characters will seem more real if they do something that's kinda odd but not over-the-top: something you could picture people in real life doing but is still different, annoying, humorous, or memorable. Again, the quirk just adds to the character's relatability and believability.

I know that might seem like a lot to remember when it comes to making a character, but making a good character is hard. There are a lot of things that go into making some fictional person realistic enough for a reader to care about and want to learn more about him/her. So anyway, here's how I try to help myself do it. Maybe it will help you too :)

Also, don't forget my Drive to 25 Campaign for my audio book. We're trying to get to 25 copies sold before November, so please spread the word about that and link people to the audio version of The Huntsman and the She-Wolf HERE.