Today, I want to go over my 2019 sales totals for The Huntsman and the She-Wolf. Technically, the sequel (The Huntsman and the Vampire) has been available for pre-order since December, but I don't actually get those sales until launch time which is February 12th. Therefore, all of my numbers for 2019 are for THATSW only.

So, how did things go? The short answer, is wonderful! From the research I've been able to conduct, I've learned that the average independently published author will sell about 200 copies in the first 12 months and 500 for the first 36th months.

THATSW launched on March 26, 2019. So that gives me about nine months of data. I've extremely happy to announce that I've been able to surpass the first year average in only three-quarters of the time!

Let's break those numbers down a bit:

These are fantastic numbers for a debut story! In total, not counting Kindle Unlimited, I've sold 234 copies of The Huntsman and the She-Wolf. If you were to divide the Kindle Unlimited pages by 209 (the number of pages in my eBook) you would get another 33 copies.

I could not be more excited and please about the book's performance. I want to offer a sincere thanks to every single person who has supported me in this endeavor. It's been a great year.

Now, I don't want anyone to think I'm making this post to brag. I'm certainly not. Since I've been published, I've had numerous people ask my how hard it is to write a book, what is it like to publish, and how many copies have I sold? I want to be transparent with people, so that anyone who takes the steps to write and publish their own novel, will understand what the business is like and what their expectations should be. The Huntsman and the She-Wolf would be considered "successful" under most models, but absolutely not a runaway success. 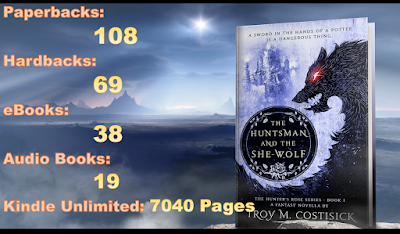 So, that's where things stand after the first nine months. In just a few weeks, the sequel will launch. I think Book 2 is going to delight you even more than the first! And, I'll be glad to share sales data from that as well. Expect it to be less than the first. That's just the nature of the system.

Anyway, I hope the new year is off to a good start for everyone. Tune in tomorrow for the next Thursday Reveal!