*Thursday Reveal* - Sample CHAPTER from The Huntsman and the Vampire

We are only THIRTEEN days away from the launch of The Huntsman and the Vampire! This week, I'm going to share an entire chapter with you.

When I originally planned this reveal, I thought I would share the first chapter. It makes sense since that chapter provides the hook for the story, but the more I considered it, the more I decided I didn't want to reveal that just yet.

You see, there are several surprises in chapters 1 and 2 that I appear on the first page I revealed a few weeks back. I still want to keep those a secret for now.

So instead, I have prepared for you Chapter 3: Attack on the Lodge.

You don't need to have read the first two chapters to understand what is happening in the third. The chapter is strong enough to stand on its own.

However, there are a lot of subtleties in this passage. Look for the smallest details. Note who appears and who does not appear. Make a mental note of where the characters stand and where they go, and also, note what objects are desecrated or destroyed. These will all be important later in the book.

This is one of my favorite chapters in Book 2. There's a lot of action, intrigue, and even a little romance. It's also the first time the vampires (also called bloodborn) appear on-page. I hope you like them. Let me know what you think!

Here is the link to the passage: The Huntsman and the Vampire: Chapter 3 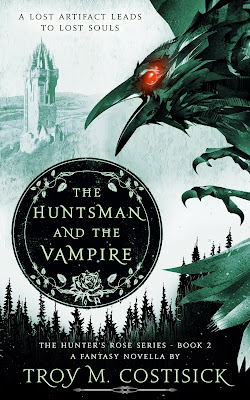 As a reminder, Amazon has the eBook, Paperback, and Hardback available for preorder right now! If you want to receive your book on the day of the launch, order soon!