I am so glad to have you with me today. This will be the first in-book content I reveal for the sequel to The Huntsman and the She-Wolf.

As I mentioned earlier this week, I wanted to get some art for the village inn. The inn serves as a social hub for the community as well as a place of refuge for travelers and merchants. It's a tall building - three stories in all - made in the customary half-timer design.

In the first book, I reveal that the inn is owned by the main character's uncle. I never gave a name to the inn at that time. It didn't need one. Now, however, something is changing in the community, and it necessitates a name for the inn.

So, last warning, ***Spoilers***!
.
.
.
.
.
.
.
.
The name of the inn is now The Oak Sprig Inn. I spent a lot of time narrowing down a huge list of potential names. There's a lot of symbolism in the name, but that's not something I'm going to get into right now.  You'll have to wait until Teaser Season for that.

Anyway, let's have a look at my new artist's conception of the inn: 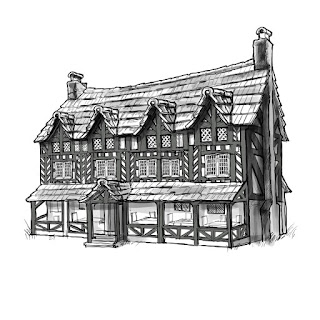 Compare that to the first illustration I received that I will NOT be using: 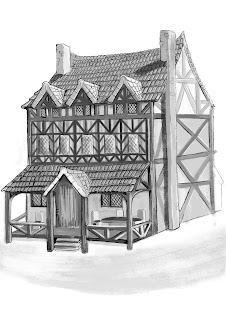 All-in-all there are 24 rooms in the inn for guests. Not pictured is a small stable in the back. Horses are uncommon in Celandine Valley, so the innkeeper doesn't bother much with extra straw or feed. There is a chicken coop and a pigpen though.

Anyway, I'm thrilled with how the Oak Sprig turned out. It's going to look very nice in the finished product. Hopefully, it sparks your imagination too.

The next reveal will be a week from today. Until then, enjoy!