Now we're getting to the good stuff. Last week's reveal, in case you missed it, was on the Facebook fanpage. If you haven't had a chance to like and follow that page, please do. The curator has put a lot of time and effort into it, and I really appreciate that.

This week's rose is from the leader of the Huntsmen's Lodge. His name is Thaul DeSardis, and he inherited the leadership role in Book 1 from his predecessor: Deborah Stuyvesant.

Thaul can be a vain and aloof man at times, but he is also an expert warrior. He has battled many powerful Unhallowed abominations in his time and never been defeated in a one-on-one dual.

He has taken a special liking to Tristan. He has seen the potential in that young man and made sure that he has felt welcomed in the Lodge.

Despite his success and reputation, Thaul is still troubled at times. He feels the town does not respect his accomplishments and the threat from the Unhallowed always weighs on his mind. He longs to find peace and contentment. Alas, those things are rare luxuries for those in positions of authority.

Turn back now, if you wish to avoid any (admittedly mild) spoilers for Book 2: 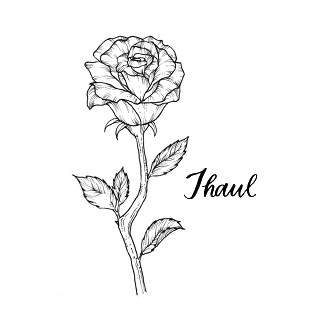 Unlike all the other huntsmen, Thaul's rose is white. It's the symbol of leadership in the Lodge. His bloom is large but wilting somewhat. Also notice how the stem is jagged and wayward at times. Thaul's journey in life has not been an easy one. His wife and son are both deceased. Most of the men and women who served in his first troupe are either retired or dead. Leading the Lodge at times has been more about managing rebellious personalities rather than fighting evilkind. Thus, his stem has twisted itself in knots at various points and struggled to straighten itself out again.

I hope you enjoyed this week's reveal. Be back next Thursday for yet another one. I look forward to sharing even more with you soon :)