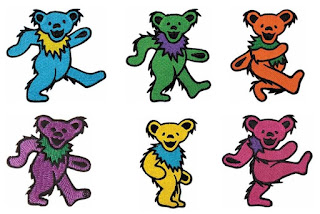 That's not what I'm talking about. The archetype of the dancing bear (and the dancing monkey, which I'll get to in some other post) are much older than Jerry Garcia's band.

I could not truly find where the dancing bear image first appeared in storytelling. There examples in Norse, German, Saxon, and First Nation lore. Each has its own take on the idea.

The version I like the best is as an enslaved creature with a keen mind and big heart. The stories often go that someone has captured an exceptional bear and put it on display to make money either in a carnival or traveling show of some kind.

Then, some good-hearted villager watches the poor bear dance until it is nearly exhausted. Feeling sorry for the creature, the villager secretly frees the animal during the night.

Many years later, that villager is out in the woods collecting berries or chopping wood (depending on the version) and is attacked by wolves. When all seems hopeless, the villager is then saved by the bear he freed so long ago. The two part ways and never see each other again.

I imagine it could be a retelling of some sort of St. Paul and the Talking Lion, but whatever. It's a cool story and one I'd like to use some day :)