It's Thursday and that means it's time for the Weekly Reveal!

So this week, I'm expanding on a location I've been talking about for a while now. It was mentioned in Book 1, so I don't feel that exposing the name here is much of a spoiler.

So one of the place the characters will have to account for in Book 2 is Tatterdemalion's Tower. As explained in Book 1, it was originally called "Greyfell Tower" and served as a type of lighthouse in the middle of Celandine valley.

Before many of the roads and small hamlets disappeared, wanderers and travelers would stay at the tower on their way to their destinations. When it fell, much of the western part of the valley had to be abandoned. The villagers were all squeezed into Vitalba.

Now, it is a place of evil. Most huntsmen avoid it if possible; villagers never travel there voluntarily. Only those captured by the bloodborn, the vampires, enter its unhallowed gates. 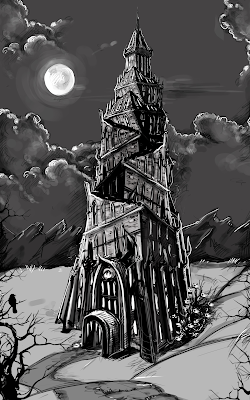 You might notice that the tower seems disjointed and broken. That's intentional. The vampires remodeled much of Greyfell when they took it over to suit their own needs. With vile magic borrowed from Lord Dreadstone, they reshaped the once proud haven into a twisted heap of disjointed architecture.

I do want to point out one thing, however. A small reminder of the huntsmen still remains. A single rose bush hugs against the side of the tower. The vampires never removed it, and it has evaded notice ever since they came. That's some amazing tenacity in my mind!

Anyway, come back next week for something new. And don't forget about the book signing this Saturday 11 to 1 at the Marion County Public Library in Lebanon, Kentucky. Hope to see you there!