*SPOILERS* 9th Reveal for Book 2 - A Corridor of Horrors

As we approach Halloween, I figure it's time to start discussing some of fantasy-horror aspects of Book 2. So this week, we're going to reveal a location in Celandine Valley inhabited by the vampires.

One motif that I really enjoy in fantasy literature is this idea that old buildings get repurposed as time goes on. For instance, take Orthanc from Middle-earth. Most people know it as the tower of Isengard where Saruman the White Wizard takes residence.

It wasn't always that way. Long ago, it was a fortress of Gondor, not a wizard's tower. However, as the decline in Gondor's kings inevitably led to the decline in Gondor as a nation, Orthanc was locked and abandoned. It wasn't until many centuries later, after a siege against the Dunlandings, did control of Orthanc come back to the free peoples and the steward of Gondor pass the keys of the tower to Saruman.

So why the little history lesson? Today's reveal is of a place with a similar history. In the center of the valley (as depicted on the map in Book 1) is Tatterdemalion's Tower. It wasn't always his. It belonged to the huntsmen once, until they fell into despair. But I'll discuss more of its history next week. This week, let's take a look at the inside. 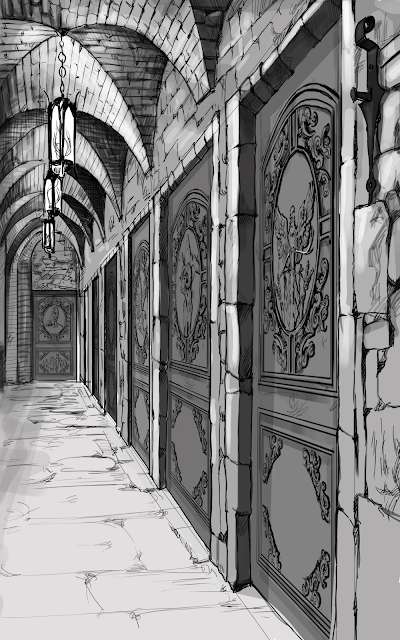 I know it may be hard to see, but the door at the end of the hallway is similar to the door I revealed three weeks ago. This is intentional. The huntsmen used the same symbols throughout their history, just as any organization would. Since this tower once belonged to them, it shouldn't be surprising to see their markings everywhere.

The vampires (also known as bloodborn in Celandine Valley) never bothered to erase what the huntsmen had built. They just turned the tower into their own den of villainy. So when our heroes visit the tower, they'll have some knowledge about its inner working that will give them an advantage.

Anyway, that's all for this week. I hope you enjoyed the reveal. Next week, on Halloween, let's have a look at the outside, shall we?